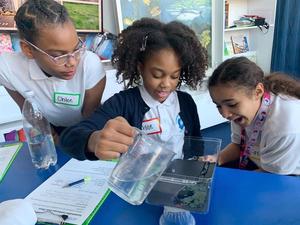 Our Head of School wrote an op-ed with Maury Litwack, managing director for the Orthodox Union, that was featured in the Gotham Gazette. Check out the full article below!

As we close the books on another challenging school year, it’s worth recognizing a little-known state program that’s reaping big benefits for our school children.

This year, New York funded $30 million to reimburse non-public schools for the salaries of qualified science, technology, engineering, and math (STEM) teachers for grades 3–12 as part of an innovative, first-of-its kind program first approved by the State Legislature in 2017.

Although you might not have heard of it, the program is certainly needed. According to a 2021 study conducted by the National Association of Manufacturers and Deloitte, there will be 2.1 million unfilled STEM jobs nationwide by 2030.

To address this looming crisis, the program works to increase both the quality and the quantity of STEM education in our schools. Only “highly qualified teachers” are eligible for reimbursement under the state’s rules, which incentivizes schools to hire someone with advanced degrees to teach their STEM classes. This helps make sure we are only hiring the best. And the more STEM classes that a school offers, the more reimbursement it is eligible for.

Many schools have gotten creative with the extra state funds. For example, one all-girls school on Long Island created its own version of the popular TV show “Shark Tank,” starring their student body of budding engineers and entrepreneurs. They call it “Fish Tank,” and some of the projects include a remote-controlled pool flotation device and a UV LED light toothbrush cleaner.

In New York City, one in four of the schools that participate take part in the federal school lunch program, an indicator of a high poverty rate for the student body. And 40% of the students educated through this funding receive some type of financial assistance from their school.

One of us is the Head of School at one of those high-poverty schools, and has seen the program’s impact up-close. Since the program started last year, not only have we hired teachers we otherwise couldn’t have – many of whom are women and teachers of color – but we’re also seeing the students engage like never before. We’re hearing more and more girls say they want to major in science or math in college, and one 7th grade student recently told us she even likes multiplying negative integers. Now that’s something we never heard before!

With results like these, now is this time for the state to double down on this amazing program. For starters, cut the red tape and the lengthy delays in reimbursement payouts, which can take years to reach schools. That $30 million our schools received this year? It was approved by the Legislature over three years ago in 2019, and all applications were received by the state before September 2020. It shouldn’t take two years to process applications.

And let’s increase the amount we are reimbursing up to $100 million. That would be enough to fund all the eligible STEM teachers in New York private schools, a huge win for our students and for our state.

At first glance, that might seem like a lot of taxpayer money for non-public schools. But think about all the other things the state funds – like $409 million in tax credits for film production companies, $532 million in tax exemptions for cable television sales, and $115 million in sales tax breaks for jet fuel purchases.

In addition, states like Florida and New Jersey – two places that many New Yorkers consider relocating to – have started or are looking to start similar programs of their own. New York has to stay competitive.

Let’s fully embrace this program and make it as strong as it can be. It’s a down payment on the future of all of our children – and all New Yorkers.

***
Maury Litwack is Managing Director for the Orthodox Union and founded its Teach Coalition division, which advocates for greater investments in nonpublic schools. Shalonda Gutierrez is the Head of School at Cornelia Connelly Center in Manhattan.