Understanding the Power of History with the 5th Grade 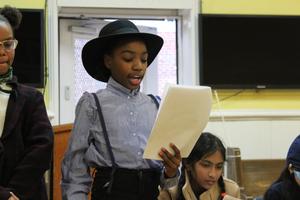 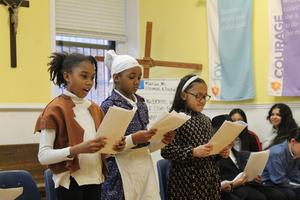 Learn more about 5th grade's unit on the Civil War!

Ms. Salandra and Ms. Wiggins are training their 5th grade class to be critical thinkers. The 5th grade recently finished reading the novel Bull Run by Paul Fleischman for their unit on the Civil War. The novel is told through sixteen different perspectives on the war, including Northern soldiers to Southern slaves and many more. The Battle of Bull Run carries the confusion, excitement, and worry of being the first battle of one of the biggest wars in our nation’s history.


“Once they finished Bull Run, we had them write their own narratives from the point of view of a created character,” says Ms. Salandra. “It’s been amazing to see how creative they are and how dedicated they have become to the development of their narrative’s character,” says Ms.Wiggins. “One student even wrote twelve pages!”


“What’s been even more amazing is seeing all of them really sit and struggle with opposing views. I think reading Bull Run has helped the class develop a deeper understanding of war. Their understanding of what it means to fight over ideologies has expanded. During class discussions, they are confident in their understanding of what the North and South were fighting for,” says Ms. Salandra. The team reflected on how a novel like Bull Run helps to humanize the “other” or someone with an opposing ideology. Additionally, the novel showcases how two groups of people, despite being a part of the same country, were so alienated from each other, which both teachers agree is very relevant today.


The 5th grade team described the challenge of teaching a subject like humanities that incorporates literacy, writing skills, social studies, and history. “It takes finding a really great novel to be able to intersect all of those in one. We aim to get our students to ask themselves ‘okay how can we look at history through the lens of this text?’ and ‘how can we begin to understand what it was like to live during that time.’ In doing this, we see the girls really grapple with difficult realities and sometimes uncomfortable ideologies and beliefs,” says Ms. Salandra.


Both teachers have pushed to get the students to understand the importance of history. “They are at that age where they’re beginning to ask the really big questions: How did slavery come about? Why did we have it? How did they decide it was going to be people from Africa? It’s been interesting to watch their reactions, curiosity, passion, and sometimes anger. I think it’s important for them to sit with that. If we learn about history then we’re less likely to repeat it,” says Ms. Salandra.


Ms. Wiggins adds, “We’ve had a lot of class discussions that we weren’t planning on having but it’s been very interesting how organically they’ve come about. We’ve seen how they’ve been able to connect that some things in our society have not changed very much and how in some ways we’re still polarized. Geographically too, it’s been a great benefit to teach this unit. We’ve seen how their understanding of the U.S.  has grown.”


After the completion of their narratives, the 5th graders participated in their first-ever Reader’s Theater. They each selected three characters from Bull Run that stood out to them the most. Ms. Salandra and Ms. Wiggins assigned each student one character from their top three choices and assigned them that character’s monologue pulled directly from the novel. The students had a week to rehearse their monologues and then on February 10, they performed their monologue before the entire class.


“Research shows that reading a text silently to yourself multiple times will not significantly increase fluency and comprehension, but that adding an additional tier of saying it aloud and adding expression to it, can greatly increase your comprehension of the text. So, we’ve had them read the text multiple times, we’ve discussed the text and now tier three is to have them perform the text. In addition to increased comprehension, the side effects of this are increased confidence and ability to read aloud to a crowd,” explains Ms. Salandra.


The 5th grade will end their year with the study of the Civil Rights movement. In preparation for that unit, their next class novel will be Crossing Ebenezer Creek, a novel that takes place during the end of the Civil War as Sherman’s army is marching through Georgia. “The novel will really set us up to discuss what happens when the Civil War ends, what happens to the people we learned to care for after the Civil War, especially to the now free slaves,” says Ms. Salandra.


“They will be able to see for themselves how slavery might have ended but not inequality and how that affects our country during the Civil Rights Movement,” adds Ms. Wiggins.


Our 5th graders are learning how to ask difficult questions and are exercising critical thought, learning to grapple with difficult stories in our history and learning about the different ideologies that shaped our country. At CCC, we empower our girls to become active and passionate members of society, to think daringly about history and how it affects us today. That formation starts as early as 5th grade. “You have to have the background information, before really caring about something. That’s what we’re doing here in 5th grade,” says Ms. Salandra. “Planting the seeds so that later, when they read text like To Kill a Mockingbird, they understand what came before that,” says, Ms. Wiggins.


Below, some excerpts from the 5th graders’ narratives:


“Cincinnati, Ohio was as violent as two bulls fighting. I was 11 years old and working for the Soldier’s Aid Society, desperate to leave Ohio.”- Kenzie, CMS ‘23


“The next morning, I woke up to the sound of gunshots and our captain yelling, ‘Grab your guns, soldiers, the battle of Bull Run is here!’ My heart dropped, like jumping into a bottomless pit.” -Nicole, CMS ‘23


“I have no children, no parents, it’s just me and my friends. But, women are way more than people who just get married and have children”- Skye, CMS ‘23